According to the University of New Mexico Geospatial and Population Studies, in 2011, an estimated 351 people lost their lives in motor vehicle crashes on New Mexico roads.

Another 18,673 people were injured.  Of the 43,227 total crashes in 2011, 2,320, or 5.4%, involved alcohol; however, among fatal crashes, alcohol was involved 43.3% of the time.  On average, a person was killed or injured in an alcohol-involved crash every five hours.  New Mexico’s alcohol-involved fatality rate has declined in the past decade; yet, since 1994, the State has still ranked substantially higher than the national average.  An even more disturbing statistic is that 60% of DWI fatalities in New Mexico involve repeat offenders with more than one arrest or conviction for drunk driving. 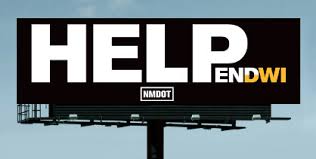